Note: this post was originally published for a university assignment. I was tasked to cover an enterprise I found interesting, and as a result — decided to write about the story behind the Atlassian. You can view the original article here.

The setting is midnight — at a dorm room somewhere in San Francisco. Two computer science majors are staying up past the late hour, writing code for the software they believe is worth the reason for dropping out of university. Fast forward a few years, and they’ve become billionaires.

It’s a story I’ve heard many times before — the cliché of the successful tech startup. As a young computer science student myself, I’ve always wondered if it’s possible for such a fantasy like this to exist outside the magical, investor-gilded hills of The US’s Silicon Valley.

As it turns out, Atlassian co-founders Scott Farquhar and Mike Cannon-Brookes have the exact same story to share. Simply substitute The Bay Area for a Sydney-side suburb, and you get the origin story of Australia’s most successful tech startup to date.

Atlassian started as a project dreamt up both by Farquhar and Cannon-Brookes way back in 2002 — half a decade before the first iPhone. They decided to start their own business because they didn’t like the idea of working for other people. Today, they’re running a company with about a thousand employees around the world, trading in the US stock market as a public limited corporation.

Though back then, Farquhar and Cannon-Brookes started at the wrong place and time. They were borne into a startup industry that hadn’t even existed yet, so VCs were sparse. And since the late 90s’ dot-com crash, investors weren’t willing to risk anything on software back then.

Because of this, Atlassian focused its initial revenue stream on early profits over investors, turning their back on capital funding. Their original business model was an early prototype of today’s freemium software system: offer trials that could then be unlocked at a price.

They did this mainly because they couldn’t afford to pay for a sales team. They believed that if software was initially free, many people would try — then buy. They made $1.3 million in their first year — so to this day, it’s a business model they still proudly hold.

Now, what exactly does Atlassian do?

Read carefully: they’re a software company that makes software for software developers. Atlassian offers a range of tools and services that make it easier for companies like NASA, Facebook or even CSIRO to make better computer programs.

In other words, they’ve targeted a very specific niche of people. That is, their market consists of big companies that have a couple thousand programmers. This is where their strength lies: they’ve built a business on the backs of bigger ones — and I think it’s a very clever idea.

Atlassian is unconventional in the way tech startups think. They don’t share the same mass-market philosophy that drives most tech startups like Instagram or even Microsoft to success. Atlassian looks the other way: their value proposition is aimed at the enterprise.

Their first major product, JIRA, is a tool that allows massive teams of programmers to collaborate. It’s a live issue tracker for agile software development. (Basically, it’s a super-fancy todo list for code). And it’s been their flagship product from the beginning.

Since then, they’ve expanded their product line to include Confluence (a digital hub for employees), BitBucket (like Dropbox but for code), HipChat (Messenger for companies) and even a marketplace (just like Apple’s App Store) for third-parties.

As they continue to grow, Atlassian’s overall mission has concentrated into one goal: to develop software that makes it easier for huge teams to work together. It’s the recurring theme around their products and services — and it’s no surprise that their trading symbol on the stock market is TEAM.

It’s because of their products they’re such a highly valued business. Right now, there is no other company with a portfolio as diverse as theirs targeted at the enterprise. This is their unfair advantage, so to speak. Unfortunately, because they’re locked into a such a niche, it can be difficult for Atlassian to hit lower-level consumers. 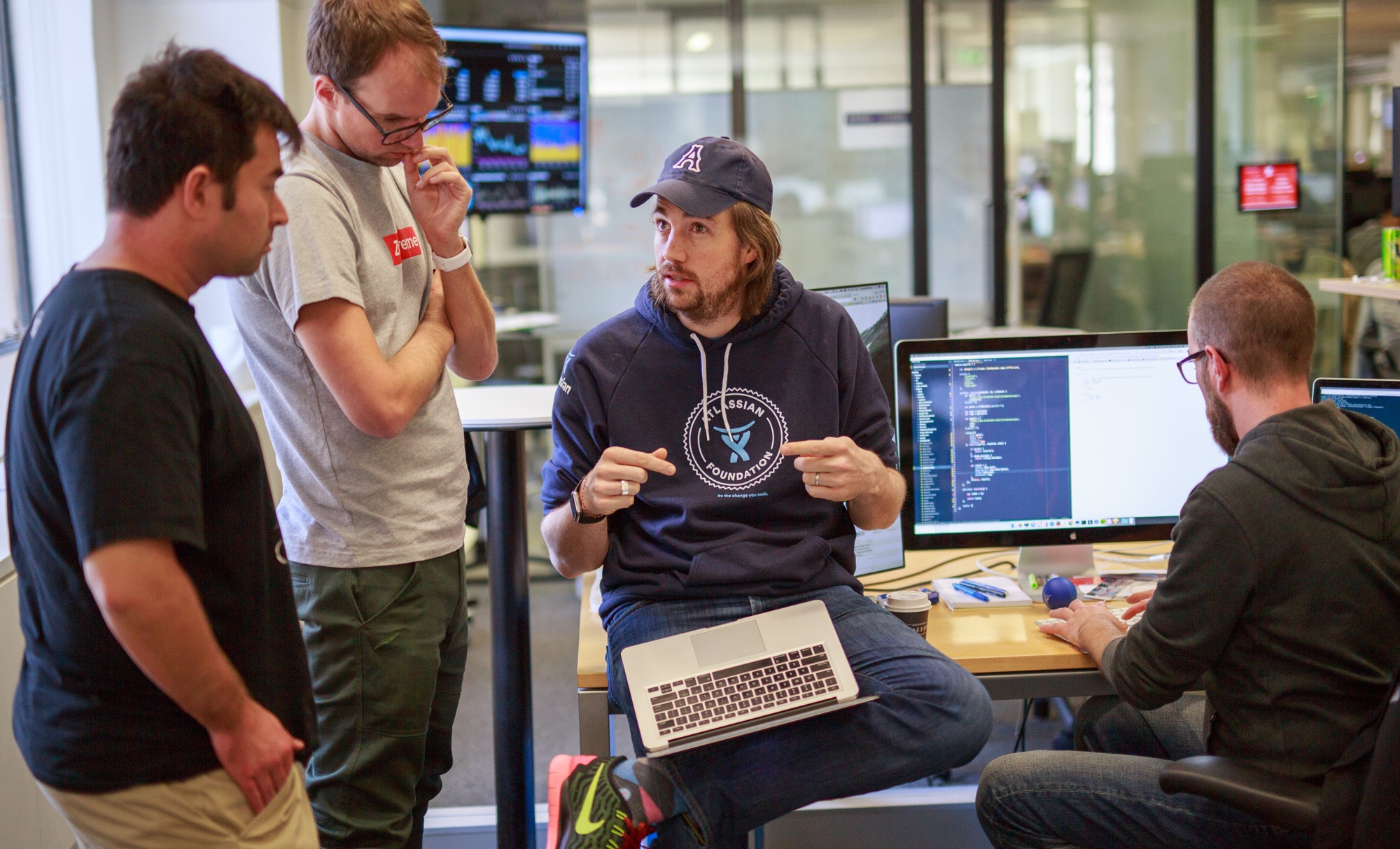 However, one area Atlassian has started placing focus on is its public relations with schools. When I attended UNIHACK last year, Atlassian was a major sponsor. Software developers and programmers can benefit from learning to collaborate better — and I believe tapping into the education sector is the perfect business opportunity Atlassian can grow towards in the future.

Although Farquhar and Cannon-Brookes are yet to be household names, their targeted approach to selling software makes them pioneers in the tech industry. Atlassian’s story to becoming a $9 billion industry giant is Australia’s proof that tech entrepreneurship can be cultivated outside The Valley.

And knowing that makes me very excited.